Rappers, Medikal and Strongman, have mended their relationship after engaging in one of the hottest lyrical feuds the music industry has seen last week.

The artistes had brutally attacked each other in a battle of words which also, unfortunately, left the reputations of their significant others to public ridicule.

Although some people had called on Strongman to render an apology to Medikal’s girlfriend, actress Fella Makafui, the rapper made it clear in an interview on theCosmopolitan Mix on Joy FM he would only do so after his colleague apologises to his girl, Nana Ama.

Medikal who had first said some unpleasant things about Strongman’s girlfriend took to Twitter on Sunday, June 30 to express his regrets for dragging her name into the feud.

Strong,I’m sorry for involving your girl in this whole thing,the street just no get formula & http://filter.Now  that I have Awoken the rap game,I would rather like to see Ghana rap music cross boarders than to fight for spots here

2,642 people are talking about this

Read more: ‘Ups and Downs’ is not a diss song

Strongman lived up to his words by apologising to Medikal for his inability to restrain himself and dragging Fella Makafui into their beef.

“Sorry for your girl’s involvement in the whole thing. Ghana Rap lives on,” the ‘Baby Girl’ hitmaker had said.

Strong,I’m sorry for involving your girl in this whole thing,the street just no get formula & http://filter.Now  that I have Awoken the rap game,I would rather like to see Ghana rap music cross boarders than to fight for spots here

1,939 people are talking about this

The rivalry between the two rappers was unexpected as little was known of it prior to the weekend open display of antagonism, which birthed four songs.

It dominated social media trends and got Ghanaians divided on who won.

It was Medikal who first ‘drew blood’ when he claimed to have saved the music industry four years ago. Several artists felt targeted by the lyrics of ‘To Whom It May Concern’ but it was Strongman who stepped forward.

Strongman in his interview with Mamavi Owusu Aboagye on the Cosmopilitan Mix, on Monday, called for a truce, urging artistes to focus on their career.

“We don’t need to keep this beef going on… I am not tired but we need to focus on the music,” he said.

It is uncertain what may have pushed Medikal to apologise, however, before the makeup, Strongman had posted a video of himself at a concert performing ‘Don’t Try’ his reply song to Medikal’s ‘To whom it May Concernn’.

Medikal on seeing that reacted saying he was glad Strongman finally has a hit song.

The ‘Omo Ada’ hitmaker urged promoters to keep putting him on their shows and encourage fans to support the artiste like they did the diss songs.

I just watched strong’s performance, I’m so happy he finally has a hit song, y’all promoters keep putting him on your shows,fans should support all his music he releases like you support beef,eno be easy to hit chale, so we always need y’all to go hard for us

2,074 people are talking about this

The tweet received some backlash from some fans who made it clear in their replies Strongman has had hits just like Medikal himself.

Strongman, also after seeing the tweet, made it clear to Medikal that although he supports his craft, he is not new in the industry and has had hit songs of his own before the feud began.

The rapper had to explain himself tweeting, “All I’m saying is now that I made y’all get his attention, support him.” Then he went ahead to issue his apology to Strongman.

The two in their tweets agreed to take Ghana music across the country’s borders instead of fighting each other in the house.

Ghana music has a rich history of rivalries.

The rivalry between Dancehall artistes, Stonebwoy and Shatta Wale came to a head at the 2019 VGMA.

Dancehall Artist of the Year, Stonebwoy, pulled a gun on Charles Nii Armah Mensah Jr. (Shatta Wale) following a protracted beef which has recently been settled.

‘Beefs’ between Lord Kenya and Obrafour, Kwaw Kese and D-Black, M.anifest and Sarkodie have all once grabbed headlines for weeks. 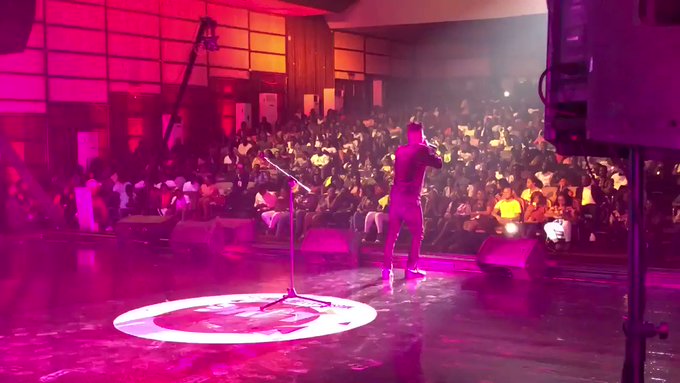